I water the lawn (initially I wrote grass but realised it is socially ambiguous) twice a week on the days allocated to me by the city council. Restrictions on use were implemented to save water. ‘Watering days’ are determined by property numbers. I have a number 4 type house, even numbered houses may water for 15 minutes on Tuesdays and Saturdays. I’ve set my reticulation system to water for 20 minutes. Only one station works. (It’s a long story). Sometimes on odd evenings I water manually using a hose-pipe. We are subversive here in suburbia.

If elected officialdom had been using some of my tax dollars to respond seriously to climate change I would be more supportive of their minor representatives. They spend millions, probably billions (it’s only money) on fear. Buying submarines, detaining refugees, translating xenophobia into policy, incarcerating young people they could be educating and funding wealthy private schools to prepare the next wave of party leadership. A few years back one beige politician took a lump of coal into parliament and waved it around to endorse his future commitment to the mineral. He is now prime minister, still beige, still imprisoning instead of supporting. So, I’m not against saving water. I’m against laws that contribute to the illusion of a progressive society. Democracy is in crisis, the social contract between government and it’s people has lost all moral integrity. I won’t be told what to do by unthinking bureaucrats. This is the frontline in the struggle against the looming Bureaucratic Dictatorship. It’s a war zone. If we cannot stand here, where will we ever make a stand? The forces of banality are massed against us. I will support life on the few square meters of earth that was forcefully taken by a corrupt government some 200 years ago and then sold to me by a banking system (recently investigated by a Royal Commission and found to be lacking) that seeks to keep me in debt as long as I’m alive. No, this is not idle insubordination, it’s satyagraha.

The sprinklers on the pavement have broken so the grass there is dying. There is always something breaking or broken. I focus on the lawn in front of the house. It’s starting to turn deep green and thicken. The plants are doing well because I feed them regularly with trace elements and, when I am brave, with a vile smelling concoction derived in part from fish (clearly very dead). When my oldest goldfish died last week, I buried her and felt I was honoring her and doing the apple tree a favour at the same time. The soil here is poor. It’s not soil, it’s sea sand. Last summer I planted a Jacaranda tree. I water it and my Frangipanis every other day. Usually odd days. To get one’s lawn green requires dedication. Photosynthesis alone is not enough. Where I don’t want grass, it grows weedlike. In the flowerbeds it is invasive. It strangles flowers. It feels personal, an act of defiance. To remove the serpentine growth I must gouge the soil and feel for the sinuous threads then pull and hope to hear the roots tearing. It brings out the beast in me. The white root snakes the air like wire as I yank it from its grip on the soil. The act of gardening is a therapy, maybe an act of vengeance against all the systems forever stacked against us. 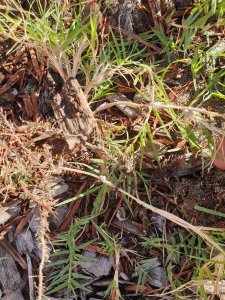 I acknowledge it as an outward sign for an internal process, a clearing. I do not wish to say cleansing. Cleansing suggests trendy Instagram focused egoism whilst trying to cultivate inner peace with one eye on your audience and sipping green tea in the shade of a jasmine creeper. No. This is war. Habitual watering is a symbolic gesture. There is the idea that this action, this repeated action, this ritual is a foreshadowing of a similar, internal process. Perhaps this way of thinking is more the result of my Catholic upbringing than experience. What the things are that will be cleared I do not know. Perhaps they will present themselves to me and then I will understand. In the meantime I take comfort from Beckett. These interminable and, of themselves meaningless, habits become the rythm of our lives. To spend thirty years of one’s life nurturing lawn, watching it die, reviving it, cutting it, letting it grow then die and reviving it over and over again is absurd. All of this on sea sand. I have become Sisyphus and swapped my boulder for a hose-pipe. I can only sustain this habit (it has become habit) if I find a good reason to continue. That is where I am. The reason is not apparent, not overtly logical. I will need to dig deep. In the meantime plants begin to die. This is annoying. Is there none of the resilience in them that weeds have? Can they do nothing for themselves? For hundreds of kilometers along the coast wild flowers grow unaided in abundance. A week without pampering in my garden and they begin to die. Well, everything dies eventually.

Entropy is the way of the world. The slow and steady dismantling of the particles that make up matter is relentless. The particles will in time be beaten back into their original, chaotic and randomly dispersed form. So it is with us. We are pulled apart piece by piece, bit by bit. Our deaths are just the gradual elimination of our parts until, too tired to fight back, we surrender the last thing we have, our breath. Even that is not ours but borrowed. We simple cease our habit of borrowing. And in the face of this we still seek meaning? We look for beauty, create it and share it. We’re either foolhardy or incredibly brave. Because of the people I know and have loved and lost I must conclude that this is an admirable quality. It is the defining feature of humanity. Giving in to the inevitable demise is an option. I get that option. There’s a blunt bravery there too. Perhaps carrying on is something that we do, not for ourselves but for those who could not, and we don’t know everyones story and are in no position to judge. Also, it is for those who must still face that choice. Either way, it is an offering of hope. It is an act of defiance. It is open rebellion and I am determined to go down fighting. I will resume my ritual of watering. I will be the root that must be pulled out of the earth with force. I will embrace absurdity. I shall wait by the tree with Vladimir and Estragon.

This information is endorsed by the CGC (Council for Galactic Cooperation).

If you are reading this it means you have made the brave decision to visit earth. We hope this page offers valuable information as you plan your visit. Currently all details contained herein are verified as correct. Please advise us as to how we might update this volume upon your return, if you do.

Co-ordination
Earth is located in the Virgo Supercluster of galaxies. Within this supercluster is the Local Group. Earth is in the second largest galaxy of the Local Group – in a galaxy called the Milky Way. The Milky Way is a large spiral galaxy and located in one of its spiral arms, Orion Arm, is earth. It is part of a Solar System with only eight planets. It is the third planet from their Sun. It is one of less explored galaxies due to its relative obscurity and an ideal venue for anthropological sociologists, offering a unique window onto early life form development. Caution should be exercised as most inhabitants, according to recent accounts, appear to be xenophobic, aggressive and generally hostile. Homo sapiens are currently experimenting with unstable nuclear particles for military and resource purposes. Most of these development programs are devoid of SE (sentient empathy).

The following galactic coordinates are based on their system of longitude and latitude (see vol II).

There are aquatic and terrestrial life forms. Within both varieties there are egg laying (external fertilisation combined, incubation and hatching) and mammalian species (internal fertilisation and live birth). Mammals appear to be dominant in terms of their proliferation across the planet. They are, however, highly vulnerable to disease. Bacterial and viral organisms are also highly developed and have on several occasions been dominant.

Earth is governed by polarity. This principle governs its physics too. The planet’s history and geography is significantly influenced by human evolution which is dependant on climate. Communities tend to establish identity based on habits which nurture their survival. These habits are the foundation of their governing systems of thought and form the framework for their organisational structures. While they perceive these systems and structures to be uniquely varied, they are profoundly similar. To the extent that communities emphasise differing methods of daily existence (culture) as primary points of identity and belonging. Exclusion is valued. These random and arbitrary differences are elevated as sacred. The geographical location of communities is likewise based on this principle of exclusion. Travellers here are reminded of the importance of researching the exclusion practices (culture) of the communities which they intend to explore. Again, extreme caution is advised in all encounters with local life forms. No communication with them has been officially sanctioned.

This is a very rudimentary introduction and more detailed evidence of recent studies are readily available in Volume II and III of this series.