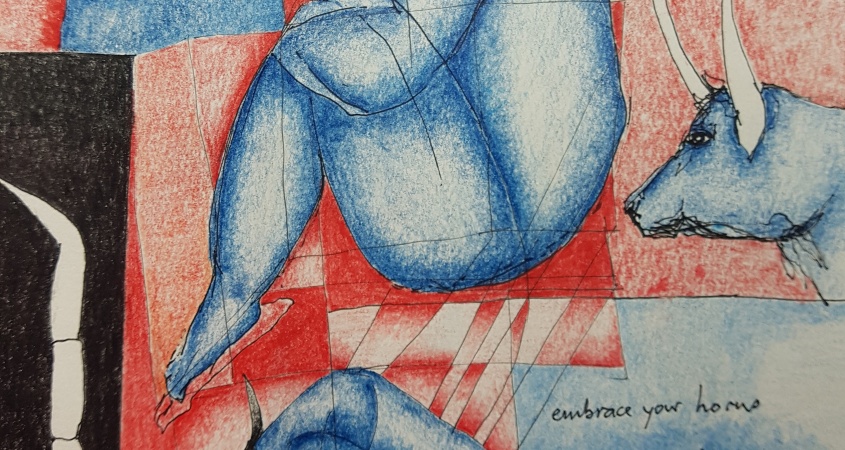 ,but, despite the tensions we were soldiers first and Kreet was the land that bound us both, the unwilling and the blind.

The hour before sunrise is the coldest. The wind picks up and the chill settles on the bones. You can run for the whole hour and not feel warmed up inside. But any time away from the camp is a relief. Especially now with the prisoners there. The enemy prisoners. We prefer the 1am duty. The guardhouse is noisy until 11pm anyway and the chance of being hauled away for some dirty job is high. At one in the morning the world feels like a peaceful place. The lights in town shimmer, the lights of the main road hang beneath the horizon like pots of fire. Once a barn owl swooped over our heads as we sat in the grass smoking a cigarette, cupping our hands over it carefully to avoid detection and putting our heads between our knees to suck in the smoke and hide the soft glow. We felt it before we heard it. It sounded like something big breathing out over us. We felt a quick rush of cool air on our necks and then heard a swoosh. Between feeling the owl and hearing it we had rolled away and were aiming at the blackness behind us. After a kilometre we started laughing uncontrollably and sat down again and smoked a cigarette but coughed a lot through laughter. That was one of the happiest moments from that time. It bound us and allowed us to remain friends after the difficulties later. That we could laugh together gave each of us permission to forgive one another later.

There was this evening in the beer garden. Blokes getting drunk and forgetting stuff they had seen or done and finding absolution in the wordless confessional of alcohol.

We have to fight to hold onto our land, Kreet is ours someone said. Maybe the beer had given me courage? Maybe the guilt of silent collusion got the better of me?

Is it really our land? I said. The Company officer, the one who had forced us to leopard crawl over slate and laughed as we had bled, was there. Like dogs we were eager for his approval. We imagined he had become a friend.

You’re crossing a line he said.

A veil of distrust descended over us. Things continued as normal after that but dialogue strained as if emerging every time tired from a long journey through an internal labyrinth where pre verbalised thoughts were considered according to possible interpretations and consequences. Everyone became cautious, having to hold the thread of the original thought while surveying the various landscapes that began to form and take shape as a result of the words spoken. Conversation collapsed under the pressure and became chatter skimming along the surface of things: the weather, physical ailments, safe complaints about people mutually agreed upon to be fools and the camp dog, Asterion. It was always safe and comforting to share stories about Asterion’s antics as if talking about him bridged the abyss deepening between us.

That was all a long time ago and Kreet is reclaimed now. Those who were once prisoners now lead and those who used to lead have been imprisoned. I wonder now if we were soldiers protecting the land or minotaurs prowling the imagined idea of a country in the subterranean labyrinth of some nameless terrain in wait for a name change? The friend with the owl now farms the land and I exiled myself from it.

The new country has a name but I have become weary of names for land. Also there is nothing new. There or here. So how does one talk now about place? The words I have are from a different time? The ears that would have understood are gone, if they were ever there. There are leaders here, but I’m not sure yet whether they lead soldiers or minotaurs.  I was a minotaur once.  Now I look for Asterion instead. There is always an Asterion.  I only saw an owl once. There are prisoners here, they are everywhere. Here the street lights do not struggle against the dark. Days are much like nights, just with slightly sharper shadows.