To pacify the people of Rome the Caesars promised them bread and circuses. The French Revolution was ignited by bread. Lenin promised “Peace, Bread and Land” to the Russian people and orchestrated a worker’s revolution. For the past 30 years I have been working on my own domestic revolution, and it involves bread.

I was raised properly  (there are certain things-all evidence to the contrary-which one is honour bound to insist upon) to understand what constitutes a sandwich. It is formed by placing the food of your choice between two slices or pieces of bread. If I were, as is customary, to slice a sandwich in two I would have a sandwich, halved. Simple? I thought so too. At this point the domestic ritual becomes rather complicated. One of the first debates with my wife was about whether two slices of bread (sandwiched) remained a sandwhich when cut in half. If I offered you a sandwich I would use two slices of bread, sandwiched, cut in half and I would then present to you both slices as a sandwhich. I maintain that no matter how many times one slices the sandwich, it remains a sandwich.

Three decades of often heated kitchen debates have ensued, evolving into a philosophical debate of ontological proportions. When is a sandwhich not a sandwhich? When we apply deconstructionist thinking to this noble victual, regarding it rather as a cultural item shared, signifying a yielding of hostility.  An edgy stalemate currently exists in our household. Thirty years later I still ask “one slice or two” when I construct the bread thing. It has become a matter of principle. I forget which principle, but that is besides the point. I ask the question to remind my much loved wife that my opinion, indeed, my character, on this issue stands. I have conceded much in my time for the sake of peaceful coexistence but on this point I intend to stand. Bread has become an ideological touchstone.

Some give thanks for their daily bread, I offer heartfelt gratitude to the bread roll. Not for its nutritional blessings but for its honesty, its lack of ambiguity. A bread roll halved or quartered remains a bread roll. They are culinary diplomats: easily bending to the demands of others whilst simultaneously original.

The sliced loaf is unpredictable. Seemingly innocent and ordinary, it belies the domestic anarchy lurking beneath its seedy crust. 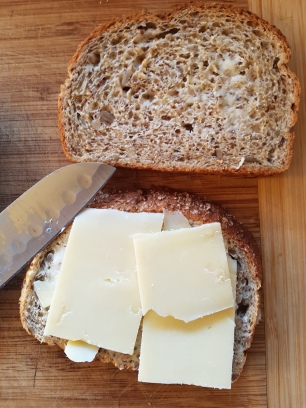 Upon one slice of bread spread soft butter so as not to shred the texture of the bread. Onto one slice carefully place one’s desired filling (mature cheddar cheese is my default preference).

Place one slice neatly above the first and press down slightly. Cut in two, usually from corner to corner, creating two triangles or straight down the centre thus creating two rectangles.

The final product: a sandwich plated for one, halved and yet reataining it’s original identity of sandwich. We can learn from the sandwich. 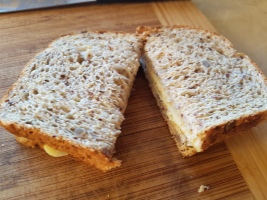 The language game with bread extends to our perception of being. Bread is bread whether you are talking about a slice, a loaf or all of the loaves of bread in the world. Whether you are here or there, it remains you who is somewhere. Geography does not alter the state of the soul.  The paradox of language manifests in the sandwhich. If there is no common agreement on what constitutes a half or a whole sandwich what chance is there for peace between warring nations? Our suburban ideological stalemate over bread tranlates to politics and religion. We assume our differences are immense when in fact we have always been talking about the same thing. There are no ideological conflicts, only conflicts over language.

Since life is so short, I’m leaving now to make my wife a sandwich. A single sliced one at that.

After all, it’s only bread.